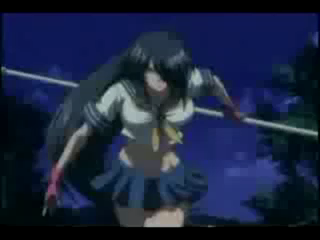 Personality is similar to the manga. In the first series, Kanu only appears in two episodes to fight with Ryomou and Hakufu (including Hakufu's dragon-mode). Kanu's over-confidence led to her arm being broken by Ryomou. She then gets serious and beats off Ryomou using only her legs and left arm, but still manages to win a second the fight against Hakufu while she was in her dragon state. Kanu was expected to win the toushi tournament before she unexpectedly forfeits after her fight against Hakufu. Animation-wise, this Kanu shows both her eyes, which is a totally different hairstyle/look compared to the manga and second season (she is not completely one-eyed in the second season though; in a few brief scenes both eyes are shown). The blade part of her weapon was never shown in the first series. The Seito school color also appears to be teal instead of blue.

In Ikki Tousen Dragon Destiny, Kanu is similar to the manga version in terms of appearance. Like her predecessor in Romance of the Three Kingdoms, she is one of the pivotal characters in the events of the series, as she lives her destiny as Ryuubi's protector and as one of the strongest toushi alive. Being the main character in this sequel, Kanu's invincibility was played down to make her character more believable; she wasn't portrayed as strong as compared to the manga and the first anime series. Kanu is less flirty, less confident, insecure, and her intentions towards Ryuubi are more obvious. She even admits her love for Ryuubi to Koukin.

When she sides with Sousou and with Hakufu looking to challenge Sousou to a fight, Kanu accepts the fight on his behalf. She is seen with a new dark, yet still revealing costume, possibly acting as a metaphor for defecting to Kyosho's evil leader. However, Kanu's loyalty to Ryuubi doesn't shake nor does her superiority over other toushi (as Chou-un pointed out and later proven by Kanu herself when she broke free of her handcuffs under her own power, she could have just left Kyosho if she wanted to). She made it clear to Kakouton that she will kill Sousou if he attempts to assault Seito or harm Ryubi in anyway. She was told to leave Kyosho by Kakouton and she returned to her own school. However she takes Chou-un's advice to stay away from Ryuubi, allowing Ryuubi to blossom as Seito's leader. She returned at the Battle of Chibi to protect Ryuubi. At the end of the series Kanu is still with Ryuubi, as her guardian and close friend. A joke at the end has Ryuubi recommending Kanu to read a book called Ikki Tousen. The book is meant to be Romance Of the Three Kingdoms, which the series is based on. In the third season, she has finally came into terms with her feelings for Ryubi Gentoku (who seems unaware) and fantisizes about Ryubi doing intimate things with her on numerous occasions.

Add a photo to this gallery

Write the second section of your article here.

Retrieved from "https://animegirls.fandom.com/wiki/Kanu_Unchou?oldid=4097"
Community content is available under CC-BY-SA unless otherwise noted.