May is a Pokémon coordinator from Petalburg City and is the daughter of the Petalburg City Gym Leader, Norman, and sister of Max. She meets Ash Ketchum in Hoenn and starts traveling with him after obtaining her first Pokémon, Torchic.

She has rivalries from some contest participants, Drew, Harley, and Jessie of Team Rocket, and goes on to win many contests. She is in 4 Pokemon movies. She picked Torchic as her first pokemon and Squirtle as her first Kanto pokemon. May is generally a very sweet, funny, fun-loving, caring, kind-hearted, and a brave person. But sometimes A real go-getter type of confident person. When it comes to certain things, she can be a glass half-full type of a straight Woman that she is, even though she is a very nice person

But she can have a tougher side sometimes, such as when she argues with her brother, Max sometimes. Despite that they argue once in a while, she has definitely shown that she really deeply cares for her brother and at times she helps people especially ones with romance problems and sometimes May has a tendancy to rely on luck once in a while when it comes to certain things.

She really loves cute pokemon and flashy techniques, and competing in contests. she really loves making her own Pokéblock with recipes that she thinks up, including ones she calls "May's Purple Surprise" and "May's Pink Surprise" while everyone else rejected them after tasting them, the only ones who liked her Purple Surprise are her Munchlax and Jessie.

When May saw a contest battle for the first time, she decided to become a coordinator. She then had to overcome her fear of bug type Pokémon by raising her Wurmple into a Beautifly.

While Ash and Brock chose to travel to Sinnoh, May decides to follow her rivals to Johto. However, she meets up with Ash, Brock, and Dawn in Sinnoh, wearing a green bandanna like the character Pokémon Emerald, then sometime later participates in the Wallace Cup

. After narrowly losing to Dawn in the Wallace Cup Finals, she leaves the group to continue her journey in Johto. In many episodes it is shown that she might have feelings for Drew

, despite their long- going rivalry. May actually once jumping of a cliff to save him from drowning. 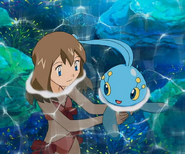 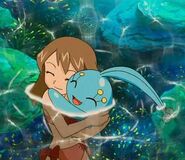 Add a photo to this gallery
Retrieved from "https://animegirls.fandom.com/wiki/May?oldid=4251"
Community content is available under CC-BY-SA unless otherwise noted.